HAVING TROUBLE LINING UP YOUR PUTT? 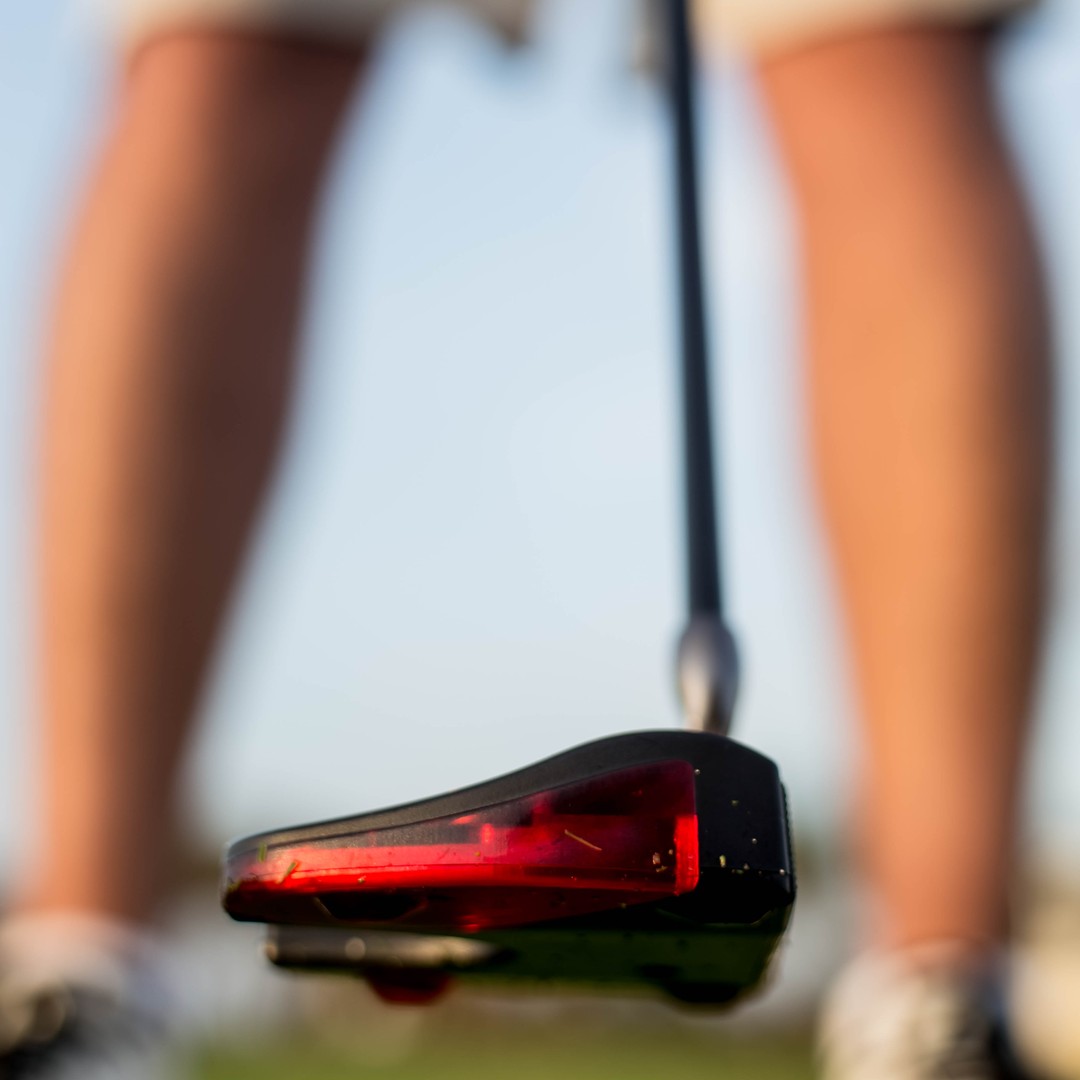 VALE is the most affordable putter in the Bloodline's lineup. But don't let the price fool you. The quality of craftsmanship and the materials used are of the highest quality. You will love the high-end feel of this putter.

VALE features Bloodline's patented technology that will let you calibrate your eyes by aligning from behind in practice and during competition.

Viewing your target line will enable you to have perfect aim on every putt.

With VALE, you can calibrate your alignment before each round on the practice green or ensure perfect aim on every putt on the course. As a result, you will be confident knowing you are aimed precisely at your target. This will result in more makes, especially from within ten feet.

We know that VALE will help you become a better putter. We will even let you try it risk-free for 100 days to prove it. If your putting doesn't improve, simply return the putter to us in good condition, and we will refund the purchase price.

THE BLOODLINE PUTTERS CONFORM WITH THE “RULES OF GOLF”. 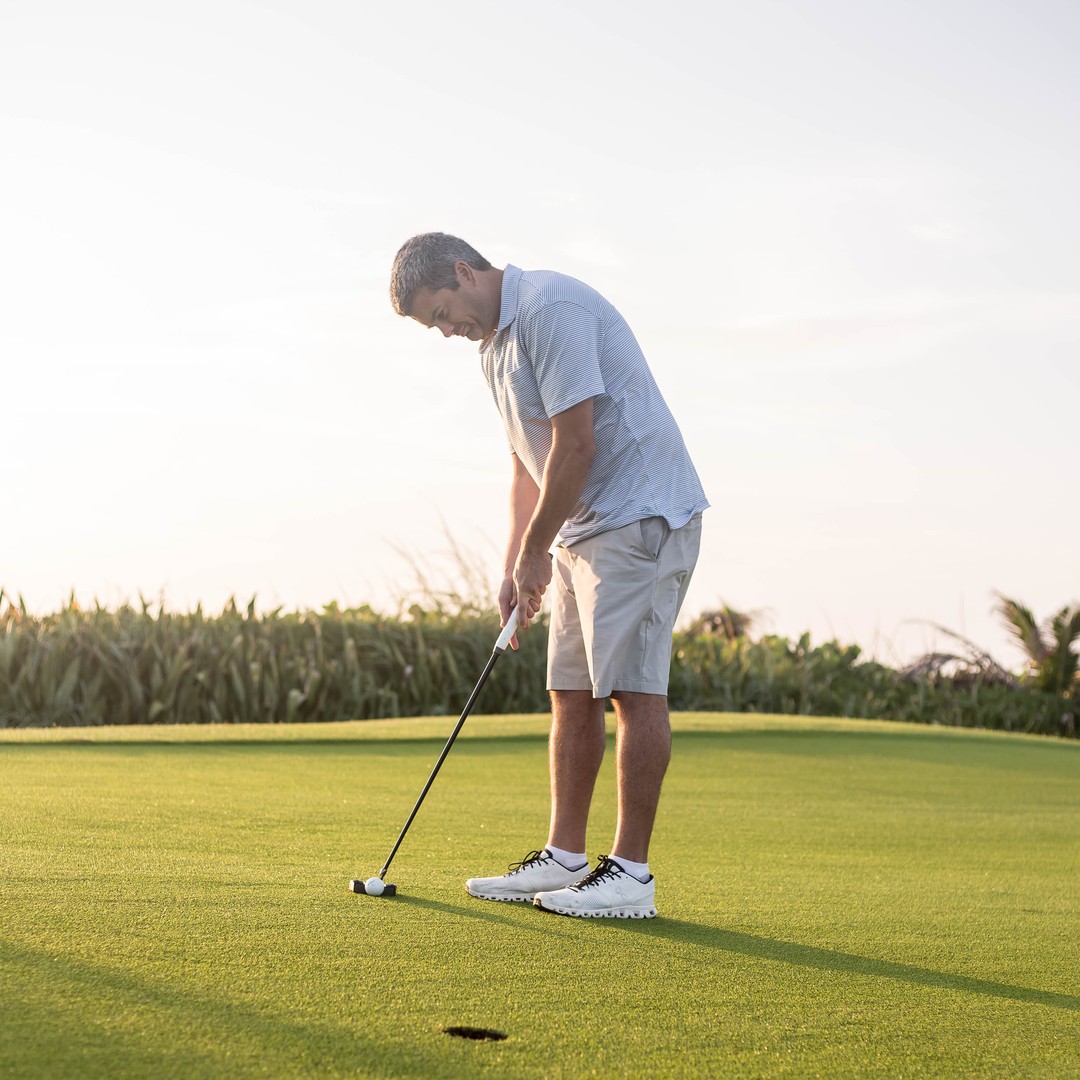 Misalignment is the #1 reason for missed putts.  A putt aimed 1° off line from 10' will miss the target by 2".

With the Bloodline putter, you can align putts from a better perspective. From behind the face, it’s possible to see the club, ball, target line, and hole without having to tilt your head or use your peripheral vision.  Viewing your target line from behind instead of from the standard address position will allow you to see the impact of slight variations in putter head adjustment more easily.

Lack of confidence and/or consistency are things that every golfer will face at some point in time.

Bloodline's patented technology and premium construction will deliver the confidence you need to be the best putter you can be.  Choose the putter that is winning on TOUR instead of others that pretend to have tour-caliber performance. 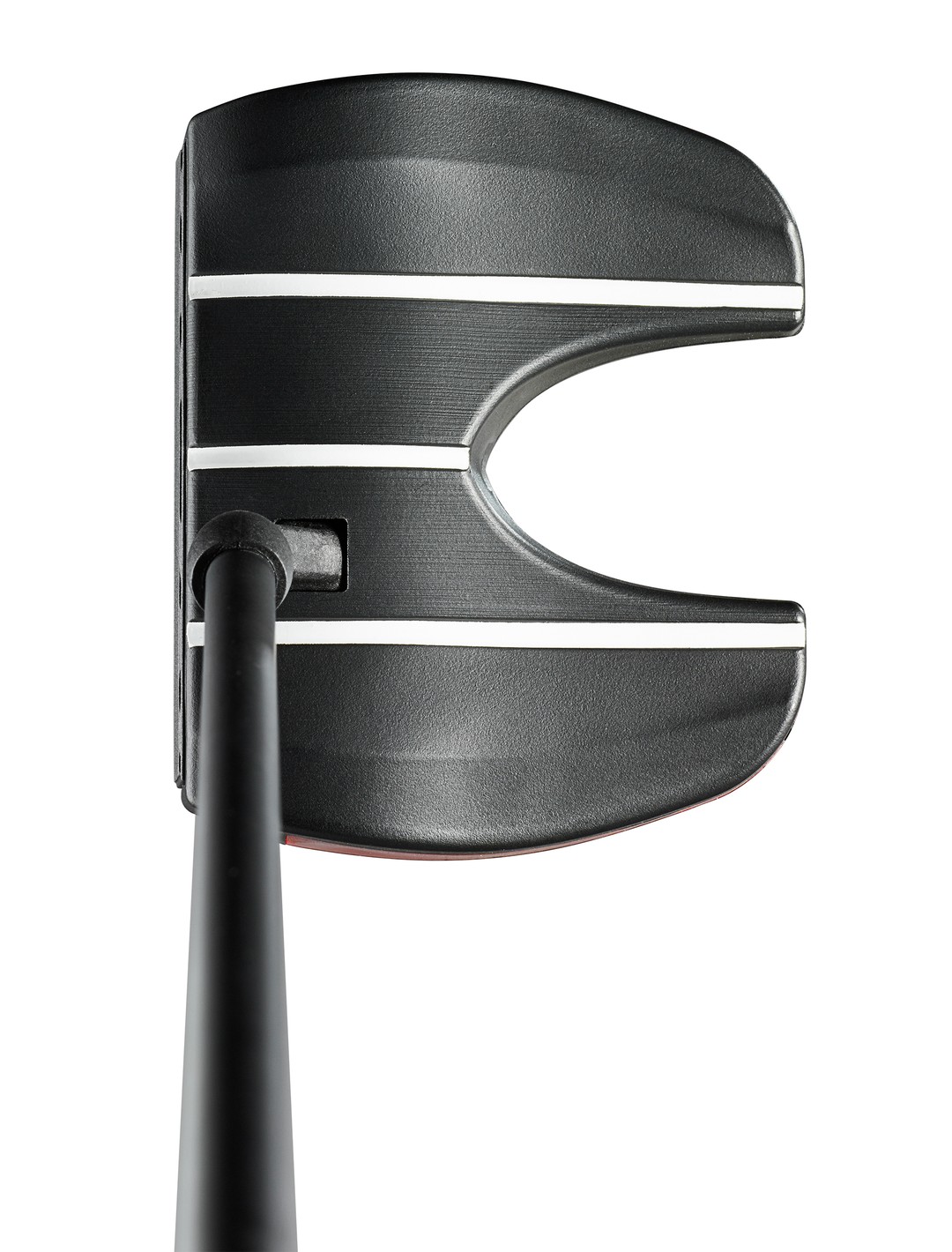 THE VALE IS MADE UP OF: Brad Adams, has been in the golf industry for 30 years. In 1991 he became Sr VP at Odyssey Golf and was a key member of the team that built that brand that continues to dominate the putter category. Brad is credited with developing and co-authoring the Odyssey polymer insert patent. During his tenure managing the PGA, SPGA, LPGA and EPGA tours, Odyssey saw over 200 players win more than 100 events, including multiple majors. After his time with Odyssey, Brad started the Never Compromise putter company which had more victories on the major golf tours in its first year than any putter brand in history.

Larry Bischmann, has over 20 years experience in the golf industry. Larry was the Tour Engineer and part of TaylorMade adidas Golf’s Global Sports Marketing team that re-claimed the #1 driver count on the PGA TOUR.  Starting in 2003, Larry built the team and strategy that launched the Diamana which became the most successful premium shaft brand in the world. 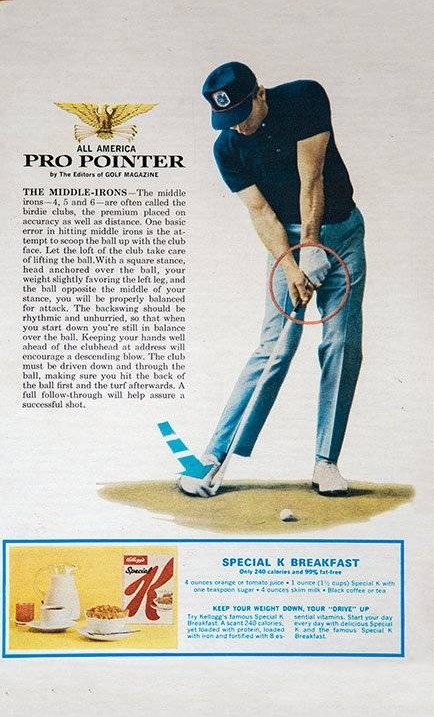 Bloodline is rooted in three generations of golf industry success. In 1919, Vale Adams was born in the suburbs of Chicago, Illinois. Vale was born into a golfing family and excelled as a player from an early age. Vale began caddying when he was just 13 and became the youngest member at McHenry CC. After a number of club championships, Vale became the head pro and was so well respected that some of his golf lessons were featured on a series of Special K cereal boxes.

Vale's son, Gary followed in his father's footsteps and was the captain of his college golf team. In 1979, Gary founded Taylor Made Golf which created and dominated the metalwood industry. The editor of Golf Digest named Gary Adams as one of the top 5 disrupters in the golf industry along with Tiger Woods, Arnold Palmer, Gene Sarazen, and Johnnie Miller. Thanks to his father and grandfather, Bradley Vale Adams has been around the golf industry for over 4 decades. Brad won the Illinois PGA Junior State Championship as an 18 year old and was one of the founding members of Odyssey putters at the age of 25.

The Bloodline name, which was conceived by Brad's nephew, pays tribute to the Adams family’s success in the golf industry. Brad and co-founder Larry Bischmann are building on individual careers where they were leaders at companies that became #1 on the PGA TOUR and held dominant positions in the marketplace. The Bloodline brand is built on a commitment to live up to a proud family tradition of making a lasting impact on the game of golf. On January 17, 2018 Ernie Els announced that he was becoming both an ambassador and an investor with Bloodline Golf.

"The Big Easy" began using Bloodline in 2017 and finished the year ranked #4 in the statistical category "Total Putting" on the PGA Tour.

Els was the first player to use Bloodline in a major championship when he played it in the U.S. Open at Erin Hills.

“I fell in love with the feel and roll the first time I used the putter,” said Els.

“Then, the more I worked with the Bloodline technology, the more I felt like it was helping my confidence and also my consistency. I wanted to be involved with Bloodline because products that can make this kind of an impact on people’s games don’t come around very often.” 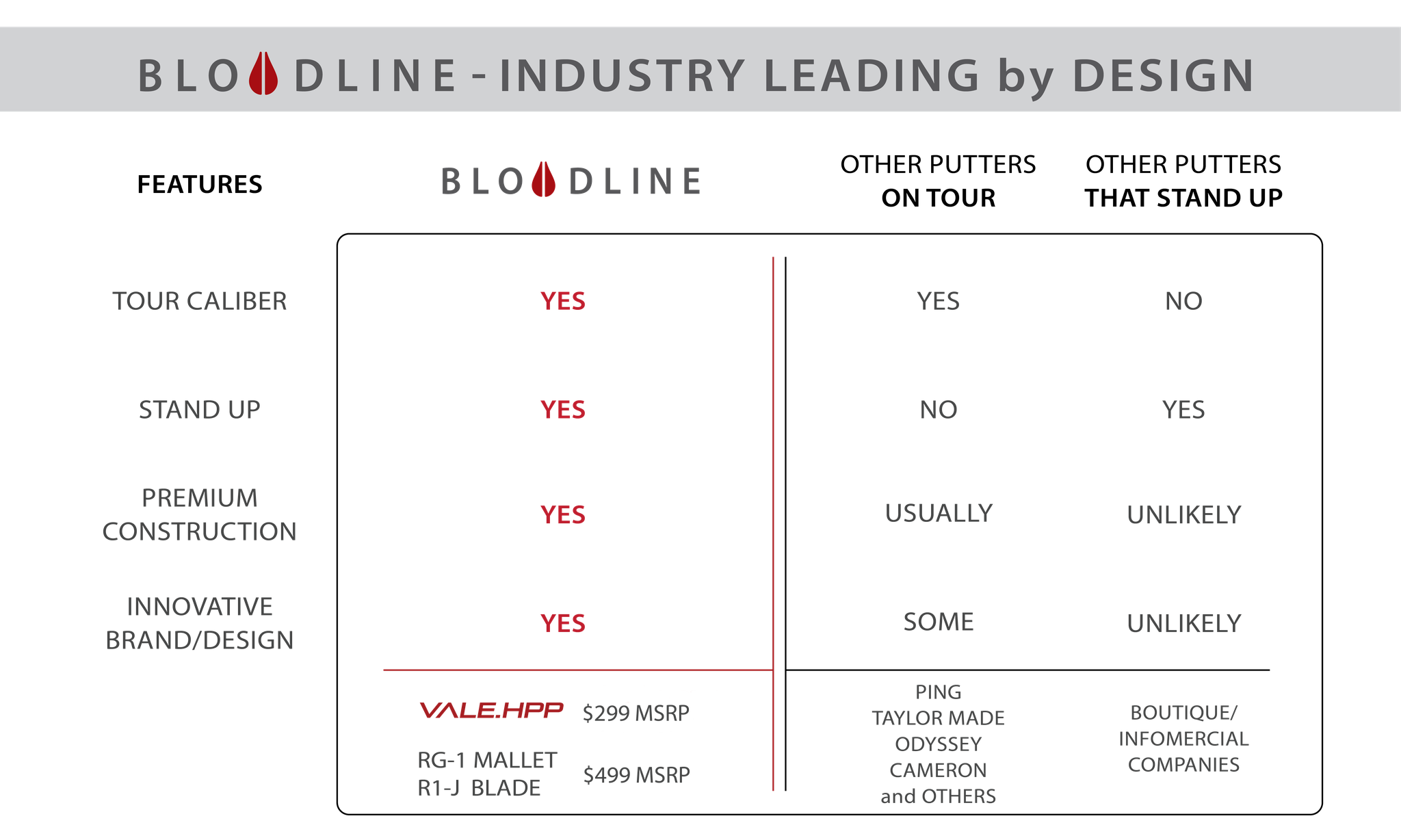 I love the new putter. They’re going to send me a shorter shaft and switch it out because they sent the standard one out. I love love love the putter more than anyone I’ve ever used. Thank you for designing it

MY PUTTING WAS BETTER ⭐️⭐️⭐️⭐️⭐️

Just got mine and wasn’t planning on using it. Took it out and was shocked how much better my putting was. I am severely left eye dominant and line putts up wrong. This really helped.

I don’t recommend much but this putter has noticeably improved my putting.  I’m a low single digit handicap and always thought these were douchey, but I’ve changed my mind.  I hate taking the time lining up the line on the ball and I thought I’d use this and get behind the club and it works just fine for that (unless it’s windy, it’ll fall over, recent rule change helps this ).   How I use it to my benefit- I don’t set the club up and get behind to check the line.   I get over it normally to adjust my line then when ready I barely let go of the putter to let it sit and balance properly then I lightly regrip and go.  100% has caused my setup to be consistent over and over and caused me to grip it much lighter to give me more feel.

The question about the oversized grip-  they use a thin wrap like a tennis grip to lighten the weight so it’ll balance.  I would think an oversized grip would be too much.  The weight of shaft and grip is a lot less than normal and takes a short time to get used to but well worth it.

After putting with my new Bloodline putter for a couple of weeks, my confidence on the greens is steadily on the rise. It’s a great aide in lining up my putts and has an awesome feel. I track my number of putts per round and have dropped my total number of putts by 10%. I have great confidence that this percentage will grow. 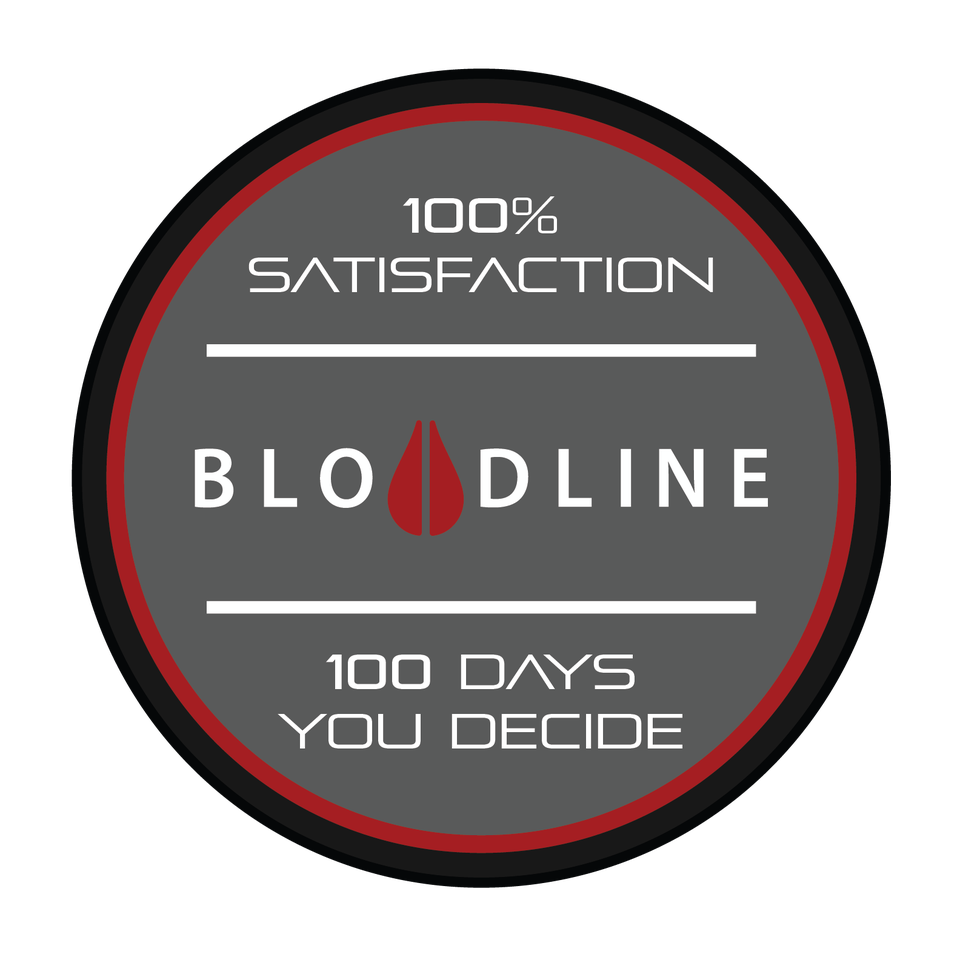 We are positive that Bloodline putters will help you become a better putter!

If your putting stats don't improve within 100 days, simply return the putter to us in good condition and we will refund 100% of the purchase price.

Bloodline Golf is proud to introduce the VALE putter to its line of innovative products.

Bloodline Golf is proud to introduce the VALE putter to its line of innovative products.